The Worshipful Company of Cutlers is one of the most ancient of the City of London livery companies and received its first Royal Charter from Henry V in 1416. Its origins are to be found among the cutlers working in the medieval City of London in the vicinity of Cheapside. As was the case with the other trade guilds of the day, its function was to protect the interests of its members; to attend to their welfare; and to ensure that high standards of quality were maintained. Their business was producing and trading in knives, swords, and other implements with a cutting edge. Over time the emphasis shifted from implements of war to cutlery and other domestic wares such as razors and scissors. 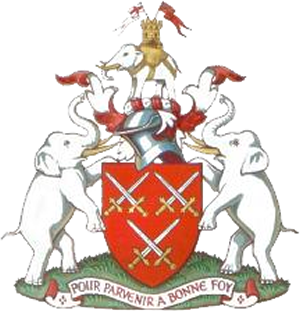 The Arms of The Worshipful Company of Cutlers

With the demise of the sword making and cutlery trades in the City during the 19th. century, the Company directed its attention towards supporting the surgical instrument trade by indenturing apprentices, and expanding its charitable activities with particular emphasis on supporting education. Today the Company combines these charitable endeavours with maintaining the traditions of the City of London; supporting the Mayoralty; providing fellowship and hospitality; and preserving the Company’s Hall and other assets for the benefit of future generations.

The Company has been associated with the Corps of Drums Society since 1997 when it was invited to support the Director of Infantry’s Competition by providing an annual prize of a drummer’s sword.  Wilkinson Sword were originally commissioned to produce the swords.  However, since 2005, when they closed their sword making division, the swords have been supplied by Pooley Sword Ltd.

The sword is fashioned on the 1895 pattern, the ‘Roman’ hilt being of gilded metal and bearing the cipher of the Sovereign.  The steel blade bears details of the award and has a black leather scabbard.  The sword becomes the personal property of the winner and may be worn when on parade in full dress. Since 2000 it has been presented annually to the winner of the competition by the Lord Mayor of the City of London on the day of the Lord Mayor’s Show.

Clerk of the Cutlers Company

The Worshipful Company of Cutlers.

You can find out more about the history, charitable aims and activity of The Cutler’s Company at: