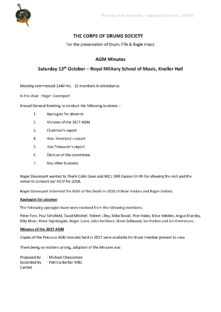 Minutes of the deferred AGM held 11 March 2017
There being no matters arising, adoption of the Minutes was proposed by G Thackery, seconded by Tim Smith and adopted nem con. …

Meeting commenced 12:35. 19 members in attendance
In the chair : Peter Nightingale

Maj. Mike Hall : The meeting began with a minute’s silence in recognition of the passing away of Maj. Mike Hall. The Chairman quoted Maj. Richard Powell, whose words could not be bettered: “We say goodbye to possibly the most inspirational Drummer of the last 100 years”

The Chairman began by apologising for the AGM’s not taking place in October 2016. A number of issues had come up and he had judged that it was not the correct time to do it.

Minutes of the meeting held Saturday 24 October 2015 : there being no matters arising, adoption of the minutes was proposed by T Smith, seconded by G Thackery, and adopted nem con.

Treasurer’s Report :    G Thackery talked the meeting through the accounts.  He said that many subs payments were coming in without details: he urged members to check that their bank had the correct details for the payments they were making.

The Chairman informed the meeting that the Committee were intending to upgrade the materials used by the Editor of Drummers Call.

The Chairman informed the meeting that although there was no legal requirement to have the accounts audited, then Committee felt that this should be done, and were going to approach R Stone.

Chairman’s Report : The Lord Mayor’s Show 2016: The Chairman was very pleased with the turnout and thanked all members of the Society who took part.  He  suggested acquiring clear plastic wet weather covering: G Fairfax suggested purchasing a set for the entire Corps  and said he would investigate this.

The Chairman thanked everyone who had lent their support over the past year, but was disappointed with the attendance at meetings : given that there are three practices and one LMS rehearsal, members should be able to attend something.

Individuals and Corps should ensure that their music is of a high standard when attending Society practices.

T Smith suggested advertising the Society’s existence – he said there were a lot of bands in the Kingston district.  G Fairfax suggested contracting them.  The Chairman invited T Smith to follow this up in an email dialogue.   Action T Smith, P Nightingale

Cutlers Sword : The Chairman explained that at the last competition there were 2 Coldstream Guards and 3 Riflemen candidates.  He congratulated the winner : Cpl TJ Hayter of 4 Rifles.  The next competition will be held on 17 June 2017.

Richard Holmes Award : The Chairman announced that this year’s winner is Brian Winchester.  Brian is one of the biggest contributors to Corps of Drums and the drumming world, through his support of the Society, his own corps(Cinque Ports), and to the Chesham All Girls Band.  There will be a profile in the next Drummers Call.

Practice Venue : The Chairman thanked the Cadets for the use of the Centre as a practice venue, which was an excellent one: they will be receiving a donation from the Society. Action G Thackery

Drummers Call : The Chairman informed the meeting that we are looking for a new editor, as Peter Hart, who has been Editor for 18 years,  would like to hand over to someone else.  The Society is looking to provide everything on a PC, so that it can be brought to a meeting and examined there by anyone who is interested in taking on this role.  He urged interested parties to talk to Peter Hart about what is entailed.

The Chairman appealed for individuals, groups and Corps for articles and photographs.

Web Page : The Chairman appealed for notification of events so that the Chairman can co-ordinate dates and hopefully avoid clashes with Society meetings. Action all Corps

Facebook :The Chairman reminded members that the Facebook page was available for discussion of relevant or interesting subjects.  He was concerned at the high proportion of advertising and sales material and felt that it should not be used for free advertising.  Jo Milward pointed out that authorisation could be built in – if would-be contributors were not authorised, they could not get access.  This to be investigated. Action P Nightingale

Election of officers: Existing members of the Committee were all willing to stand again:

Training and Development –  Iian Pattinson was willing to stand

There being no other names for consideration, the above 7 were proposed by Z Byrne, seconded by R Dunn and adopted nem con as the current Committee.

Additional business :The Chairman reminded members that the Society Music books are now in use, with electronic versions available from the Secretary

M Cheeseman felt that the repertoire for the LMS was too large and people were discouraged from learning it.
There being no further business, the meeting closed at 1250 hrs.